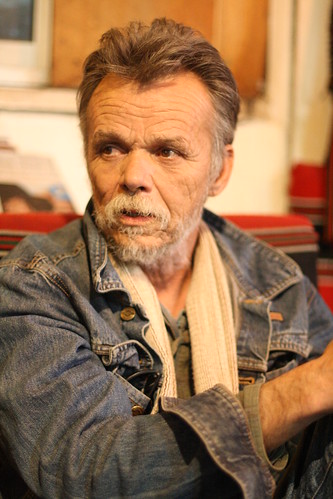 Teens suspected of beating U.S. Jew to death in Jerusalem

Suspects allegedly attacked Lance Wolf, 60, because he refused to give them a cigarette; Victim lay bleeding for 50 minutes before anyone called for help.

Two East Jerusalem teenagers have been arrested in the beating to death a 60-year-old American Jew, Jerusalem police cleared for publication on Tuesday.

One of the suspects said that the attack occurred because Wolf “talked back” when the two teenagers asked him for a cigarette.

The investigation began on August 18, when Wolf was found unconscious and bleeding in Kikar Hahatulot ‏(Cats’ Square) in the center of the city. A bloody stick was found next to him.

Wolf was transported to Hadassah Hospital where doctors battled to save his life but he passed away from his injuries on Monday.

One of the suspects in the beating death of Lance Wolf brought for a remand hearing at the Jerusalem Magistrate’s Court.

After looking at footage from other surveillance cameras and an intensive investigation, police identified the two suspects last Thursday.

The suspects at first denied beating Wolf, but eventually admitted their guilt.

The teenagers said they had gone out in the center of the city and beat Wolf after he refused to give them a cigarette, before escaping from the scene.

The two were indicted on manslaughter charges on Tuesday in Jerusalem District Court.

Wolf lay bleeding for no less than 50 minutes, despite the fact that surveillance footage showed people and cars stopping next to Wolf without calling for help.

Police said that Wolf’s life may have been saved if he had been brought to the hospital earlier.

Police said that the there were other teenagers who witnessed the incident. The teens were drinking from a bottle of vodka bought for them by an adult. Investigators are considering bringing charges against the adult who purchased the alcohol for the teens.