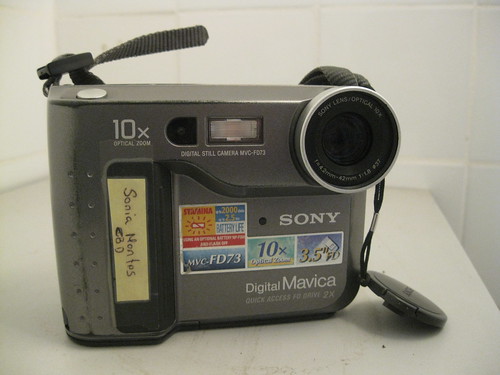 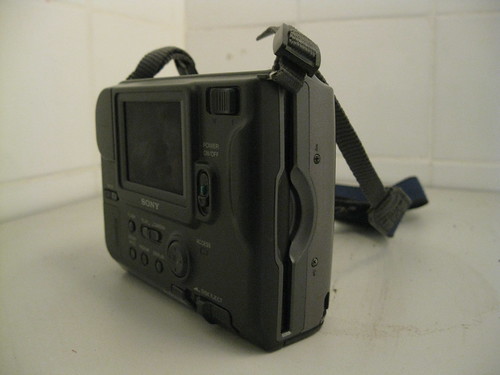 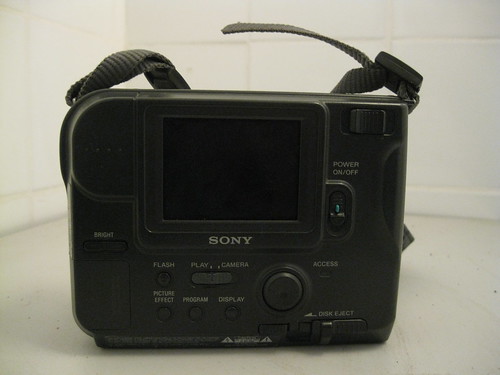 See a more complete contemporary review of this camera here

Pournelle waxes lyric about the joys of using Olympus digital cameras, and I’m sure he’s right. Of course, he then goes on to detail the troubles he’s had transferring images to his PC and getting them massaged into a form usable on his web site. Not ready for Aunt Minnie, indeed.

I’ve been playing around with a digital camera—a Sony Mavica FD7—that my friend Steve Tucker bought recently. Sony is not a mainstream name in digital cameras, and the Mavica certainly marches to a different drummer in design and features. But before you rush out and plunk down your cash for that Olympus, take a look at what the Sony Mavica has to offer.

Let’s get the bad part out of the way first: the Mavica’s maximum resolution is only 640X480—not very high by today’s standards. As a matter of fact, when Steve showed me his new acquisition, my first thought was that he’d made a serious mistake. The more I play with it, though, the more I think he probably made a very good choice.

On the plus side of the ledger, the Sony stores images directly on its internal high-density 3.5″ floppy drive. The diskettes it produces are vanilla PC disks—readable by any DOS or Windows computer. This means you don’t have to mess with cables or transfer software to get the pictures from the camera to a PC. You can simply pop the diskette into a PC and copy the image files. For that matter, the Mavica has a copy utility built-in. If you want to give a copy of a picture to someone, you can simply copy that image (or the entire disk) and hand the duplicate diskette to him.

Another nice thing about the Mavica is that it uses standard JPEG format. Each image is stored as an individual .jpg file, with an identically named .411 file that contains the timestamp and other information about that image. You can opt to store images in either “standard” (compressed JPEG) or “fine” (uncompressed) form. An average fine image requires about 60 KB of disk space, while a standard image requires only 30 KB or so. Although the file size varies according to the particular image, you can typically store 15 to 20 fine images or 30 to 40 standard images on one floppy—about the same as a roll of film. Unlike the roll of film, however, you can easily delete your failures and reuse the disk space for a good shot.

Because the Mavica stores images natively as .jpg files, putting them up on a web site is trivially easy. You can simply copy the image file directly from the Mavica’s floppy disk to your web content folder and create a link. I’ve put several examples up on my web site at http://www.ttgnet.com/mavica_samples.html. These are straight, unretouched versions. I did nothing other than copy the file from the disk to the web folder. I suppose I could use Photoshop to clean them up a bit, adjust the contrast, and so forth, but I think they look pretty good as is.

Still another advantage of the Sony is its lithium-ion rechargeable battery. Most digital cameras eat batteries, but the Mavica’s appetite is small. Although I haven’t verified the numbers, the manual states that a fully charged battery allows about 500 shots without flash, or about half that number using the built-in flash (which operates automatically from about 6.5 to 13 feet). Other operations—formatting or copying disks, viewing images, and so forth—reduce battery life, so the numbers Sony provides are likely optimistic for real-life use.

However, even using high-consumption modes and pessimistic assumptions for battery life, the Mavica allows you to shoot the equivalent of about 10 rolls of film on one charge, and that’s not too shabby. The camera provides a count-down timer that tells you how many minutes are left on the battery, based on the current operating mode, so the battery is unlikely to die unexpectedly. The included fast-charger takes 2.75 hours to complete a “normal” charge and an hour longer for a “full” charge. Additional batteries are available for about $50.

The Mavica FD-7 has a pretty decent lens. It offers a 10:1 zoom ratio—from 4.2mm to 42mm—the equivalent of a 40 – 400mm zoom on a 35mm camera, or mild wide-angle through long telephoto. The lens has a variable maximum aperture of f/1.8 to f/2.9 which, in conjunction with the ISO 100-equivent sensitivity of the CCD, allows shooting without flash under most conditions. The lens normally operates in autofocus mode, with a range of one inch to infinity, although you can use manual focus in special situations.

Shooting pictures with the Mavica is pretty straight-forward, although it seems strange at first to hold the camera several inches from your eyes to use the viewfinder. Using the Mavica viewfinder reminded me of my large-format days. The Mavica’s built-in 2.5″ TFT color viewfinder is just a smaller version of the ground-glass focusing screen on the old cherry-wood Ansco 11X14 view camera (with a red-dot Artar, no less) that I used to use.

At least the image on the Mavica is right-side up. Old habits die hard, though, and I found myself moving the camera the wrong direction to account for the reversed image I expected to find in the viewfinder. You won’t have that problem if you’re not used to a view camera, though. Overall, the Mavica viewfinder is easy to use once you get the hang of it, and is bright enough to use outdoors as long as direct sunlight is not impinging on it.

By default, the Mavica works as an auto-everything, point-and-shoot camera, although you can override exposure and focus settings manually for special situations. The camera also offers several built-in modes to handle difficult exposure situations—backlighting, beach shots, etc.—and built-in themes that allow you to automatically generate various effects, including pastel shots, sepia, monochrome, and so forth.

You use the viewfinder to frame and compose the shot. Pressing the shutter release gently locks the auto-exposure, auto-white-balance, and focus settings, but does not capture the image. Pressing the shutter release a bit harder captures the image and stores it to disk. This process takes about four seconds, so the Mavica is not ideally suited for shooting fast sequences.

The images the Mavica captures are reasonably good—certainly much better than I expected. While no one will mistake them for Kodachromes, they’re more than good enough for family snapshots. We output some of them on two different printers to get an idea of the quality one might expect, with the following results:

Printed at 3X5 on an HP inkjet on regular paper, they’re very usable. On special photo-grade glossy paper, they’d be easy to mistake at first glance for standard drugstore prints.
Printed at 8X10 on the HP inkjet on regular paper, the low resolution and digital artifacts become more obvious, and the image becomes blocky and muddy, although it still holds together. Using the glossy paper doesn’t improve things much at anything bigger than about 4X6.
Printed on a $10,000 thermal-transfer printer, the images appear photo-realistic at 3X5, and are still pretty decent at 5X7. No matter how good the printer, however, the limits of 640X480 resolution mean that 4X6 or 5X7 is about the upper limit.
All printed images degrade over time, and the archival storage qualities of images printed with ink-jet inks is an open question. It’s probably safe to say that that they’re much less stable than even standard C-prints, let alone Cibachromes or dye-transfers. However, because the source data is a digital file, permanence of the printed image is of much less concern. You can simply protect the data files as you would any other computer file, and reprint the image any time you need to.

Overall, I was pretty impressed by the Mavica. I’m thinking of getting my first digital camera soon, and the Mavica will certainly be on the short list of candidates. You can get a Mavica FD-7 for about $650 from PC mail-order places and the New York camera stores. If that’s more than you want to spend, for a couple hundred less you can get a Mavica FD-5, which has a lesser CCD, fewer modes, and a fixed-focus, non-zoom lens. If you’re looking for a digital camera to grab family snapshots or images to put up on your web site, the Sony Mavica FD-7 is more than Good Enough….”