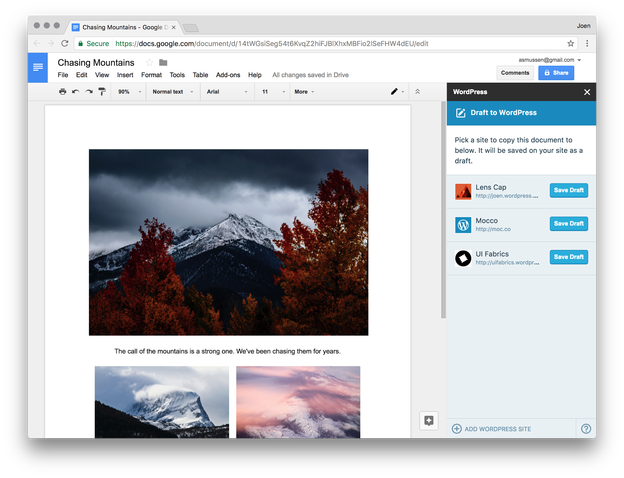 Let´s give it a try:

UPDATE: SO I AM GOING TO UPDATE THIS DOCUMENT AND SAVE IT, LETS SEE WHAT HAPPENS. IT´S MAGICAL, THE POST UPDATED ITSELF!

UPDATE 2: text sizes and colors don´t seem to be working

UPDATE 3: It only works one way, if you edit the post on wp.com, the Google Doc file remains the same :/

Update 4 : Paragraph alignment does not work either but it does detect headings right!

How about some silly colors?

Now let´s go for a table:

Imagery is the name given to the elements in a poem that spark off the senses. Despite “image” being a synonym for “picture”, images need not be only visual; any of the five senses (sight, hearing, touch, taste, smell) can respond to what a poet writes. Examples of non-visual imagery can be found in Ken Smith’s ‘In Praise of Vodka’, where he describes the drink as having “the taste of air, of wind on fields, / the wind through the long wet forest”, and James Berry’s ‘Seashell’, which puts the “ocean sighs” right in a listener’s ear.

A poet could simply state, say, “I see a tree”, but it is possible to conjure up much more specific images using techniques such as simile (“a tree like a spiky rocket”), metaphor (“a green cloud riding a pole”) or synechdoche (“bare, black branches”) – each of these suggests a different kind of tree. Techniques, such as these, that can be used to create powerful images are called figurative language, and can also include onomatopoeia, metonymy and personification.

One of the great pleasures of poetry is discovering a particularly powerful image; the Imagists of the early 20th century felt it was the most important aspect, so were devoted to finding strong images and presenting them in the clearest language possible. Of course, not every poem is an Imagist poem, but making images is something that nearly every poem in the Archive does.

An interesting contrast in imagery can be found by comparing Alison Croggon’s ‘The Elwood Organic Fruit and Vegetable Shop’ with Allen Ginsberg’s ‘A Supermarket in California’; although both poets seem to like the shops they write about, Ginsberg’s shop is full of hard, bright things, corralled into aisles, featuring neon, tins and freezers, while the organic shop is full of images of soft, natural things rubbing against one another in sunlight. Without it being said explicitly, the imagery makes it clear that the supermarket is big, boxy, and tidy, unlike the cosy Elwood’s. This is partly done with the visual images that are drawn, and in part with Croggon’s images that mix the senses (this is called synaesthesia), such as the strawberries with their “klaxons of sweetness” or the gardens with “well-groomed scents”, having the way the imagery is made correspond with what the imagery shows.

Fleur Adcock’s poem, ‘Leaving the Tate’, uses imagery of picture-making to build up the overlap between art and sight at the centre of the poem.

Coming out with your clutch of postcards

in a Tate gallery bag and another clutch

of images packed into your head you pause

on the steps to look across the river

and there’s a new one: light bright buildings,

a streak of brown water, and such a sky

you wonder who painted it – Constable? No:

too brilliant. Crome? No: too ecstatic –

rushing up it (today, that is,

April. Another day would be different

but it wouldn’t matter. All skies work.)

Cut to the lower right for a detail:

seagulls pecking on mud, below

Now swing to the left, and take in plane-trees

bobbled with seeds, and that brick building,

and a red bus…Cut it off just there,

by the lamp-post. Leave the scaffolding in.

That’s your next one. Curious how

before you’d looked at the indoor pictures,

the ones on the walls. But here they are now,

marching out of their panorama

and queuing up for the viewfinder

your eye’s become. You can isolate them

by holding your optic muscles still.

You can zoom in on figure studies

(that boy with the rucksack), or still lives,

abstracts, townscapes. No one made them.

The light painted them. You’re in charge

of the hanging committee. Put what space

and gloat. Art multiplies itself.

Art’s whatever you choose to frame.

This poem is a commission. It was commissioned by the Tate Gallery in connection with a competition they were running – I was one of the judges – and the subject had to be either a particular painting or work of art in the Tate or the gallery itself in general. And they asked the judges to write a poem on the same theme together with those by the prize-winners and they were all to be included in an anthology. So I decided to write about something I had often felt about art galleries, that when you come out your vision is different, you see things differently from when you went in. I called it ‘Leaving the Tate’.